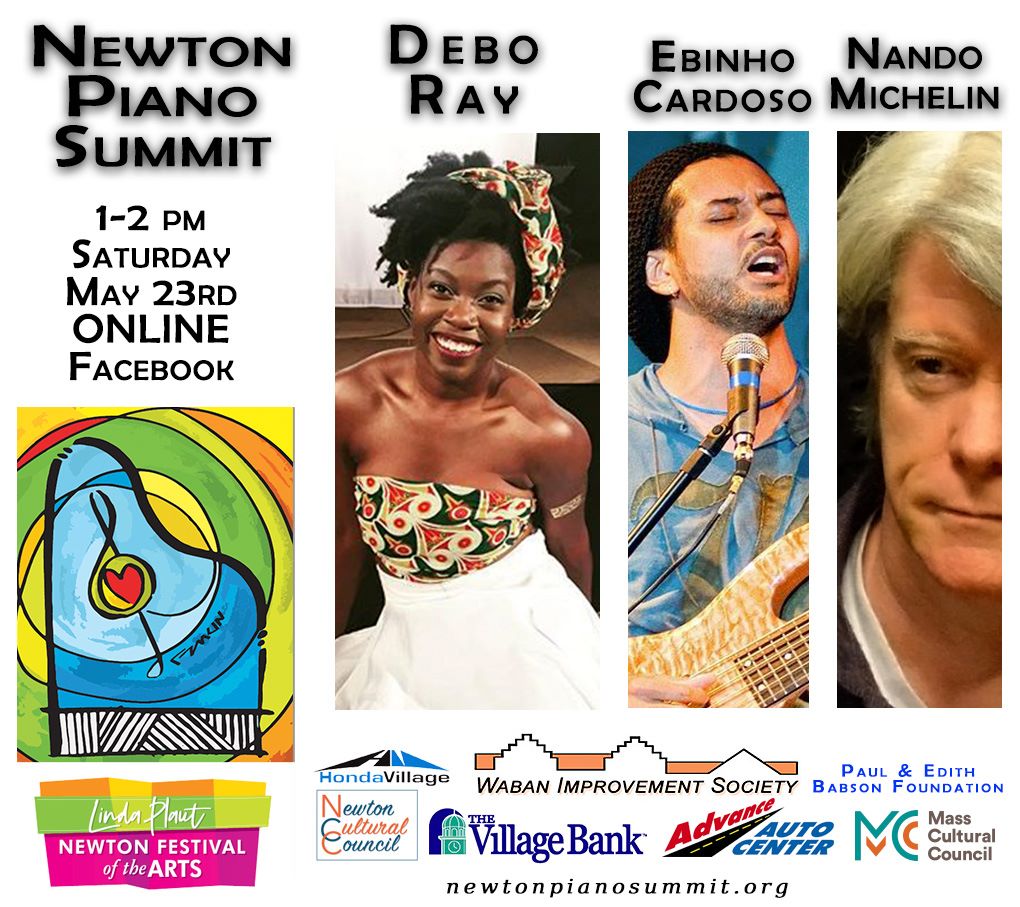 The Newton Piano Summit is pleased to present Debo Ray and Nando Michelin & Ebinho Cardoso on Saturday, May 23 at 1:00 p.m. via Facebook live. At that time, click here to access the concert.

Debo Ray is a leading vocalist in Boston and New York’s elite jazz and world music circles. A composer at heart, Debo has the ability to work as a musician thinking forward, while maintaining terrific focus on the sound being made in the present. She takes influences from her predecessors as well as from her international tours to create a sound that feels both relatable and universal. After graduating from Berklee College of Music is 2013, Debo has made a name for herself as a musician who blends theory with emotion in her performances.

Debo is also a spirited and cooperative collaborator, having shared stages with multiple Grammy award winners such as Bobby McFerrin, Esperanza Spalding, Antonio Sanchez, and Terri Lyne Carrington. She is featured in Carrington’s latest project, Social Science, which features other prolific musicians Aaron Parks and Matt Stevens, as well as Esperanza Spalding and Marcus Jamal Warner, among many others. Debo is also well known as a featured vocalist and music director of the award-winning, critically acclaimed group, Women of the World, who regularly tours internationally and has performed on such stages as Carnegie Hall, the Kennedy Center, and the Newport Jazz Festival.

Nando Michelin & Ebinho Cardoso will present music from their recent CD, featuring songs using poems by Manoel de Barros. Their music, deeply rooted in the tradition of Brazilian Popular Music and Jazz, builds on the beauty of the simple things just like De Barros intended in his poems.

Born in Montevideo, Uruguay, Nando Michelin came to Boston to study at the Berklee College of Music where he graduated Summa Cum Laude. After graduating, he studied with Charlie Banacos, Jerry Bergonzi, and Danilo Perez. His discography includes Facing South and Common Grounds for Brownstone, Art, Chants, Live at the AJC, and When Einstein Dreams for Double Time, Duende, featuring Esperanza Spalding, for Fresh Sound, Reencontro independently, and Entre Amigos with guitarist Claudio Ragazzi. The duo Ragazzi-Michelin has performed at the Wang Center and Kimmel Center for the Arts among other places. Ebinho Cardoso is a virtuoso on his instrument. Due to the uniqueness of his music and technique, he is one of the most respected Brazilian bassists. Composer, arranger, singer and producer, Ebinho uses atypical elements of the electric bass, showing its range of possibilities. In addition to playing the bass as an accompanying instrument or as a solo instrument, he has found a unique way of playing chords on the bass that characterize his playing style; a style that combines precision and refinement. In part, he is able to achieve his sound by tuning his instrument in new ways and at higher pitches. His music blends traces of jazz with the idiosyncrasies of classical music interwoven with the rich sounds of his native Brazil.

COVID-19 has changed our world and for artists who depended greatly on live performances for income, the impact is devastating. The Newton Piano Summit is committed to helping these artists by paying for their performances. 100% of revenue is paid to the performers. You can make a tax-deductible donation through the Waban Improvement Society here. More info at newtonpianosummit.org.