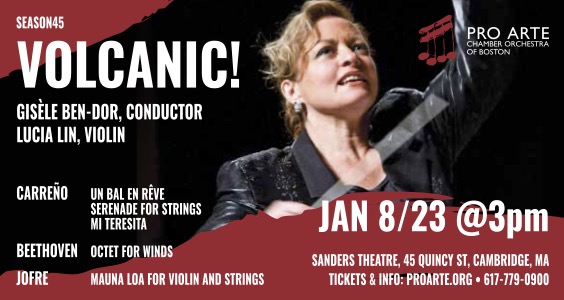 Join Pro Arte Chamber Orchestra and conductor Gisèle Ben-Dor as she returns to lead Pro Arte in a sweeping program featuring American violinist Lucia Lin—a member of the Boston Symphony Orchestra and a professor at Boston University. Ludwig van Beethoven’s Octet is a playful suite in the tradition of wind band music popular in Austria at the time. A century later, the Venezuelan-American composer Teresa Carreño wrote a Romantic take on the Classical suite during a stay in the Alps. Her intoxicating Serenade for strings conveys all the charm of the Austrian lakeside village where it was written. In the music of the contemporary composer J.P. Jofre, one hears the tango of his native Argentina alongside the jazz of New York City, where he now lives. His violin concerto Mauna Loa, co-commissioned by Lucia Lin (and performed in its US premiere by Pro Arte in March 2022), is a vibrant work capturing the immense power of the world’s largest active volcano.