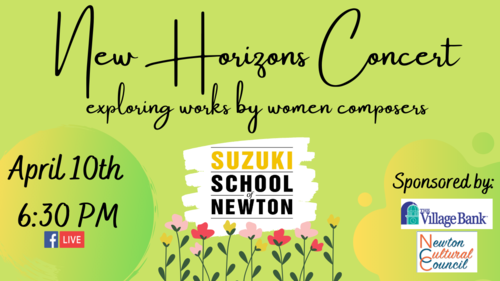 NCA is keeping you connected with each other and with your favorite local arts and culture organizations.

*The Scandinavian Cultural Center is pleased to be co-presenters for the International Shorts 2021, being presented as part of Wicked Queer, the 37th Annual LBGTQ+ Film Festival being shown virtually between April 1st through April 30th. Included is the Norwegian short The Corner (2021). Tired of waiting, Veronika tries to give her girlfriend direction over the phone, but Susan gets more and more confused with every word. The Corner is a 5-minute-long, one-shot-film, and it’s a story about communication and the sense (or non-sense) of direction. You can purchase tickets here.

*Join Historic Newton for their upcoming discussion Making Change in the Civil Rights Era on Thursday, April 8th at 5:00 PM. As the Civil Rights movement heated up in the 1960s, citizens with Newton ties felt called to participate. Clips from the film “Freedom Riders” set the stage for a conversation with Skip Griffin and Judy Frieze Wright, who discuss their activism, including attending the 1963 March on Washington, in a conversation moderated by Boston journalist Carmen Fields. Register here and receive the Zoom link in your confirmation email.

*Pro Arte invites you to the first concert in their Spring Salon Series, which takes place entirely online. On Thursday, April 8th at 8:00 PM, enjoy a concert featuring works by Ibert, Sargon, and Mozart. The concert will premiere on Thursday and will be available to watch through the following Sunday. On the night of the premiere, the performance will be followed by a live Q&A session with that night’s musicians. Tickets for each performance are $20 for an individual or $35 for families. Click here to purchase tickets.

*Join Suzuki School of Newton for their New Horizons Concert, a faculty concert with pieces performed by our teachers. This concert will occur on Saturday, April 10th, at 6:30 PM, via Facebook Live. The music performed will be focusing on women composers and music from other cultures other than Western Classical. Join them on their Facebook page on Saturday.

*Join the Newton Theatre Company this April for the next installment of the Monologue Project! Their next virtual production, debuting on Saturday, April 10th at 8:00 PM, celebrates the voices of Asian American girls and women in the Newton community. The show brings together a group of Asian American girls and women to share their stories and experiences. The stories, from a population that has been continuously silenced throughout history, explore both hardships and celebrations of how Asian American women have been able to navigate their identity and break through stereotypes. The show will include original monologues written by cast members as well as performances by local artists. Click here to reserve your pay-what-you-can ticket.